I got this email today from Gary Sjoquist, QBP Advocacy Director, asking for help to get the word out. I’ve added a few links and photos to it.

As Fat Bikes continue to grow, we’ll see this question of “where else can we ride” become more an issue. This is why Scott Fitzgerald from Fitzgerald’s Bicycles in ID and I launched the Fat Bike Summit series (West Yellowstone in 2012, Island Park in 2013). 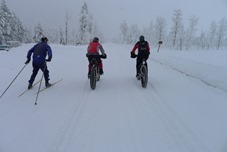 But elsewhere across the U.S., the topic of trail sharing between Nordic and fat bikes, or even snowmobile and fat bikes, will need to be addressed. With major manufacturers now producing fat bikes, and tire production suddenly increased, the numbers are increasing dramatically.

In terms of trail sharing for fat bikes, there are some early success stories, however.

Michigan Tech University is another area that has experimented with opening Nordic trails to fat bike use, again with zero issues in terms of trail damage. In Victor, ID, in Snowmobile District 33, local fat bike riders negotiated access to groomed snowmobile trails via a sticker program.

So, will fat bikes and Nordic coexist automatically? No, and they probably shouldn’t. It’s going to be a case-by-case deal, where Nordic areas with declining numbers might see fat bikes as a workable alternative. And to be fair, the examples listed out west are vastly different than here in the Midwest, where sight lines are shorter and a lot of our riding will be in heavy woods or grassy rolling meadows.

But fat bikes are not a fad, folks – if you look closely at demographics, riding opportunities in low snow conditions (existing mountain bike trails) and the dearth of winter biking opportunities prior to fat bikes, it’s a sport primed for continued growth. Retailers love it, too, as it allows them to remain a bike shop during the winter months instead of trying to make it selling skiing stuff or fitness equipment.

At the Midwest Fat Bike Summit in Cable, WI, on Friday, January 10th, we’ll examine trail sharing for fat bikes and other winter trail users. We’ll also present fat bike trail grooming techniques, both hand-powered and mechanized, for dual and singletrack trail use by fat bikes. We’ll have more details about this event soon – be sure to check the MORC site.

Another pivotal event for fat bikes will be the Global Fat Bike Summit and Festival in Ogden, UT on January 24/25. Co-hosted by QBP and the City of Ogden, this event will have a Land Manager Summit on Friday, Jan. 24th that will examine and quantify fat bike use, discuss grooming techniques, economic impacts, and offer land managers a demo fat bike ride. Friday evening, the Festival portion of the event kicks in with a Registration Party. Saturday will offer product demos, gear clinics, tech clinics, and several races.