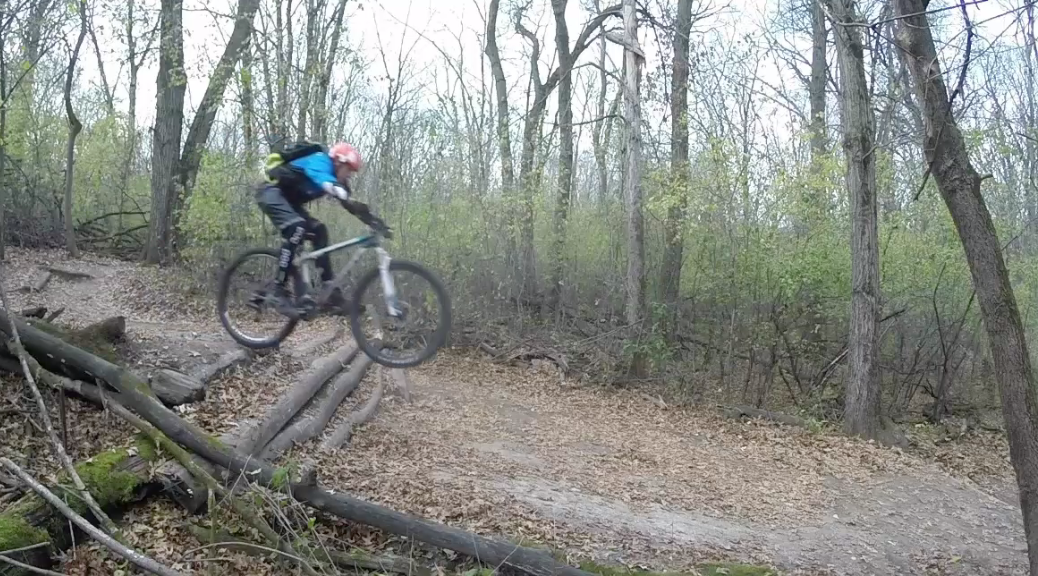 Mid-November here in Minnesota is a good time of year to try riding some MTB obstacles that I’ve been avoiding. Why? It’s not too hot to armor up completely and I have all winter to heal should my lack of skill make me pay a price.

1. Riding down the big rock at the end of the wooden bridge in the X loop of the Lebanon Hills Mountain Bike Trail. It’s a steep drop, made trickier because the landing is the bridge over a 4-foot culvert with some rocks down below. I rode it just as it started to rain. It took me 4 attempts to clean it. 20-second vid:

2. The new ledge log drop in the X loop of the Lebanon Hills Mountain Bike Trail. It’s a relatively small drop. The challenge is keeping your speed up through the sharp turn. When do you stop pedaling? The scars on the tree at the bottom indicate the price that some have paid. Props to the Minnesota Off-Road Cyclists (MORC) dirt bosses for adding this feature. 20-second vid:

3. A switchback just past Tedman’s Curve in the XX loop of Lebanon Hills Mountain Bike Trail. It’s not quite accurate to say I’ve been avoiding this. Rather, I’ve been waiting till I got better at trackstands so that I’d have a decent chance at cleaning it. Unfortunately, despite what you see in the video, I never actually cleaned it. I sometimes cleaned the bottom corner, sometimes the uphill root, sometines the rock drop, and sometimes 2 of 3. But never all 3. The video is a mashup of two separate rides. I quit after about 20 attempts. But I’ll get it. I’m young yet. 30-second vid:

4. The high skinny/beam drop at Hillside Park in Elk River. I crashed on my first attempt to ride it. Fortunately, I was completely armored up: chest and spine protection, shoulder & elbow pads, hip and tailbone pads, knee and shin pads. But I’ll be back to try it again. It looks like a hugely fun feature and I’m so glad that Hillside offers tough challenges like this. It’ll probably help for me to watch someone else ride the feature, either doing a pedal wheelie launch or just riding fast enough to send it. In the meantime, don’t make me laugh. My ribs are sore. 22-second vid:

5. The Browner stockade skinny at Hillside Park MTB trail in Elk River, MN. I was avoiding it up until a year ago when I cleaned it after several attempts (blog post here). I’m including it in this series because I’ve not attempted it since. (Hillside Pk MTB Trail is 60 miles from me, through the heart of the Twin Cities metro area.) I was going to attempt it again the day I rode the skinny drop (#4 above) but my crash and minor injuries ruled that out. FYI, The Browner is named after Ray Brown who was the first one to clean it (on a 29’er and a 26’er). Mike Samson has since ridden it on 4 different bikes, including a fat bike. Michael Loch recently joined the Browner club on a fat bike. 58-second vid:

Check this out if you have any small ones that need a starter bike.
Bike Titan: Best Hybrid Bikes Review 2017 Top 12 You Can Get Now