Skip to content
Home > People > Gilly gets a city bike from Erik’s because Rob knows how to sell
Published June 6, 2014 by Griff Wigley 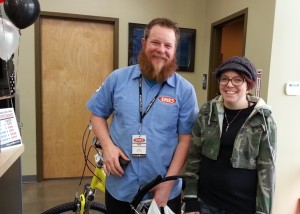 When my grown and gone daughter Gilly told me a couple months ago that she was in the market for a new bike, I told her to consider shopping at the newly opened Erik’s Bike & Board Shop in Highland Park. When she gave me thumbs up, I called the store and manager Rob Stepaniak answered the phone. 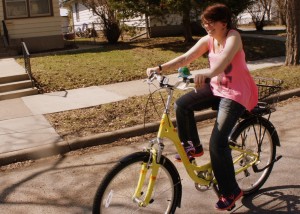 A few hours later, she had a spiffy yellow Specialized Women’s Expedition Comfort bike, tricked out with fenders, a rear basket, and a week later, a pet trailer for her dog, Mo.

I first met Rob at the Cuyuna Lake MTB Trails system over two years ago. I didn’t ride with him that day but in the course of our initial conversation, we found out that I went to elementary school with his mother, Mary Alice Shields, and her three sibs. Their family farm at Lone Oak and Pilot Knob in Eagan was two blocks from our house, and I hung out with her brother Kevin.

It was fun for me to observe him with his salesman hat on while he talked with my daughter about bikes while I lurked nearby.  It didn’t take him long to figure out that although she knew little about bikes, she had an idea of what she wanted and that aesthetics were important.  Once they settled on the comfort and stability of a woman’s step-through, he could see her attraction to a yellow-framed model. The deal was essentially done when he held up some black fenders and purple water bottle to the bike and exclaimed, “Does this look cool or what!”

He personally installed the bike rack on her car in the cold wind and when it came time to tally up the costs, he gave her the MORC member discount on all the accessories. Nice.