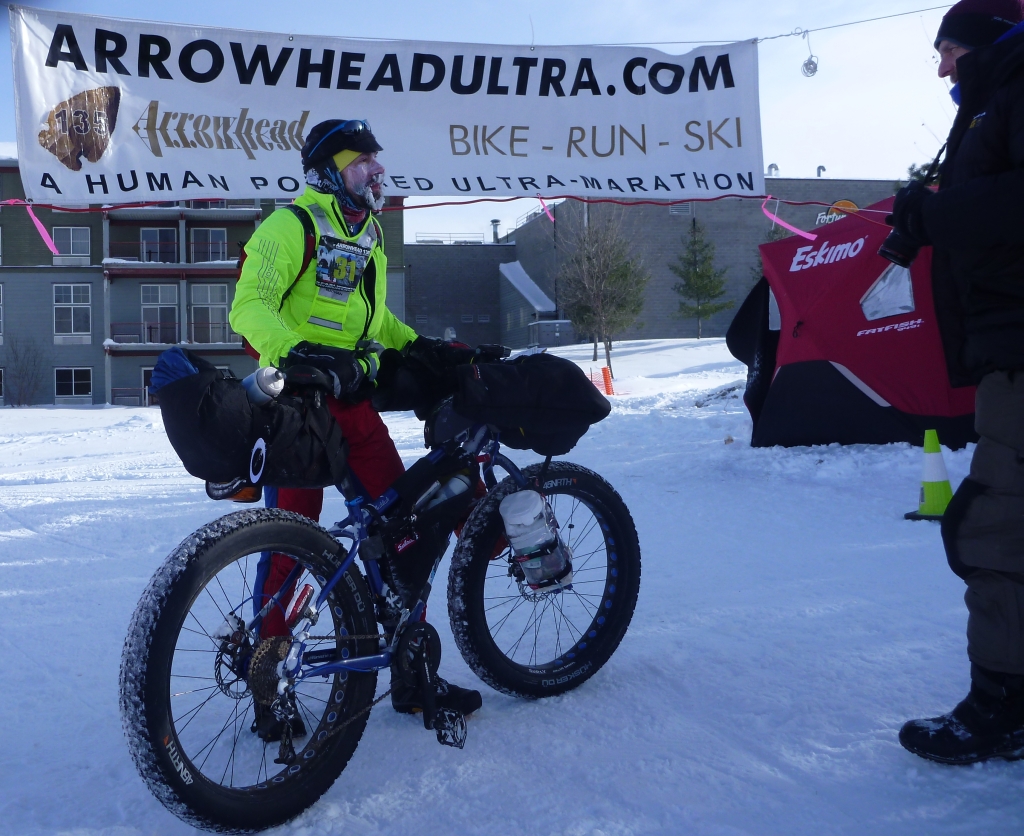 Ice, sweat and tears: Northfielder Christopher Tassava fat bikes his way to a 7th place finish at the Arrowhead Ultra 135

Last week’s Arrowhead Ultra 135 was in the news, not only for those of us who follow the world of winter fat bike racing, but because the unusually cold conditions made it an compelling human interest story.

Many of us Northfielders followed the race closely because two local mountain bikers, Jerry Bilek and Christopher Tassava, competed on fat bikes. Jerry got halfway (70 miles) before dropping out; Christopher finished in 7th place. (Results here.)

When a photo of Christopher and his beardsicle at the first checkpoint appeared with an article on the front page of the StarTribune’s Sports section, the world beyond Northfield began to take notice.  Christopher’s skill with social media tools (@tassava on Twitter, @tassava on Instagram, Tassava on Facebook) prior to and during the race made it all the more compelling.

This week he published three posts about his experience on his blog, Blowing and Drifting.  These aren’t your average race report blog posts, as he’s a very good storyteller. See Part I, Part II and Part III.  Here’s an excerpt from Part II, in which he describes his finish (photos by David Sears):

I laid there in the snow for a minute, looking up at this big bearded guy looming over me, talking to me. I was still crying, but I was smiling too. Someone else pulled my bike out from between my feet, and the bearded guy helped me up. “Hey, sit down if you need to. Rest. You’re done.” I still hadn’t said anything. Couldn’t say anything. I just thought about how hard that had been. How could it be that I was done? How did I do it? How could I tell everyone that I had finished?

“I’m okay,” I said, rolling onto my stomach and pushing myself up on to my knees, then standing up. “What time is it? What’s my finishing time?” The bearded guy tallied it. “29 hours, 9 minutes. Great job! When you’re ready, let’s get a picture of you and your bike!” I stood still for a minute more, then went over to stand behind the Beast under the finish line banner while three different people shot photos (which I still haven’t tracked down). I grinned. I was beyond elated, just a couple notches short of the high of getting married or holding my daughters for the first times.

Northfielders are having a little celebration in Christopher’s honor next weekend: 5-8 pm Saturday, February 15, at the Contented Cow in downtown Northfield. Facebook event page here.

Other media coverage that featured him:

A bit more about Christopher:

Left: He’s well-known in town for riding his bike every day to his job as Associate Director of Corporate & Foundation Relations at Carleton College… no matter what the weather.  Right: he’s a member of the Cannon Valley Velo Club.

Left: He’s a Board member for Northfield Citizens Online. Center/right: he’s one of the founding members of Bike Northfield.