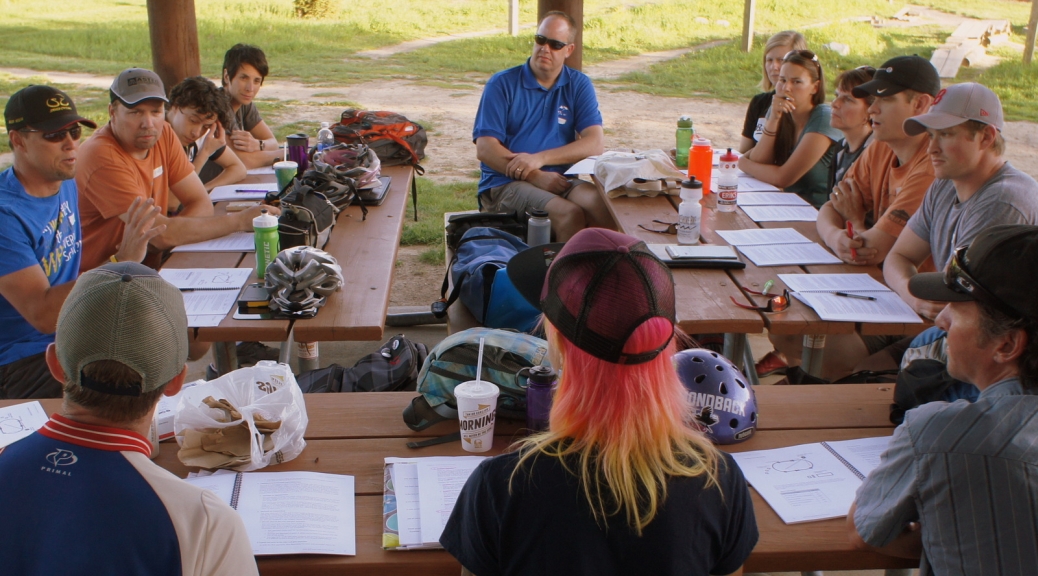 If I could only use one word to describe my experience as a student in IMBA’s Level 1  Instructor Certification Program (ICP) course over the weekend, it would be ‘intense.’

The feeling of intensity began building several days prior when a packet arrived in the mail with the 80-page Level 1 Ride Guide. It included the instructions:

Enclosed is your ICP course manual along with a pre-test for your upcoming certification event. Please complete this open book test and bring the completed pages with you to the course along with your manual.

Pre-test? I was a little bit annoyed. WTF is this, high school? But as I did my homework, I noticed a degree of seriousness kick in as I realized that I wanted to not only perform well and get whatever passing grade was needed but that I really wanted to learn this stuff.  Time to put on your big boy pants, I told myself.

By the time we gathered (6 men, 5 women) for the 5 pm classroom-only session at the Lebanon Hills MTB Trails west trail head on Friday, I’d already gotten to know the two lead instructors a bit. As a favor for IMBA’s Midwest Associate Region Director Matt Andrews, I’d picked up Kat Sweet (Sweetlines) and Jake Carsten (Dirt Dojo) at the airport on Thursday afternoon, brought them to their hotel, took them to get their loaner bikes courtesy of Jeff Milbauer at nearby Valley Bike and Ski, and gave them a pre-course tour of Leb’s beginner trails.

That tour culminated with my mildly spectacular crash on the final two of 21 rollers in the upper open field which I tried to manual in hopes of impressing them.  More than a little embarrassing. The good news: it provided them a real-world opportunity to demonstrate what to do when someone crashes hard on a ride and bounces back up saying, “I’m fine!” In short, don’t believe them right away. Use “Let’s check out your bike a minute to see if it’s okay” to buy some time to see how they’re really feeling physically, as sometimes the adrenaline surge can mask the pain of an injury.  (I actually dinged my shoulder pretty hard.)  After a couple of minutes, they then told me about their intervention strategy and then later asked my permission to use the incident in class the next day.  Um, sure. It was a lesson I’ll never forget so best to put aside my tender ego and share my mini-debacle with the others.

Most of Friday night’s classroom session, held outdoors in the covered pavilion at Leb’s trailhead, was devoted to a class discussion of all the items on the pre-test.  It also included a presentation by Mike Holme, co-owner of Magpie Cycling Adventures in Utah, who joined Jake and Kat as our third instructor for the weekend. Mike showed and explained the amazing contents of his backpack that he carries when he leads group mtb tours.

On Saturday morning, the instructors first put us through on a small set of “fundamental elements” exercises with a tell it, show it, do it approach, offering a small amount of pointers to correct our technique.  And then they demonstrated how we would be expected to incorporate these for a group ride as part of a pre-tour skills session.  Likewise, they demonstrated a pre-tour safety talk before taking us out on a short group ride, stopping frequently to model what good group ride leaders do while out on the trail.

And then they announced that each of us  would get to practice doing what they just did.  And on Sunday, we’d do it again, only that would include a formal assessment on our performance, determining whether or not we’d pass or fail. GULP.

My handwritten notes were a mess and of no use whatsoever. To make our practice experience even more helpful, the instructors would scheme with the students we were practice teaching (our fellow classmates) to see if we could detect errors in their riding, deal with problematic behavior on the trail, or handle various emergencies. One of my ‘students’ pretended to have a broken leg. I pretended to get separated from the group in one scenario. In another, I pretended to be a show-off.  (Tough acting job, right?) It’s a very effective learning strategy, quite fun when you get to scheme, quite nerve-wracking when you’re in the ride leader role, but altogether immensely engaging.

Having seen the ten practice sessions of my fellow students plus having bumbled through my own first attempt, I had a much easier time reorganizing my notes overnight.  I rehearsed my presentation out loud to myself while walking around Leb’s skills park on Sunday morning, and by the time it was my turn for the performance evaluation, I was still nervous but I was confident. I missed a few things and I talked too much but I did fine and so did everyone else.

By 3:30 on Sunday, the instructors announced that we’d all passed and the rest of the day was spent learning additional mtb skills that we’d be expected to have should we be interested in taking the Level 2 course. 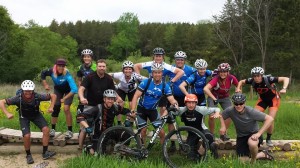 At the end of the day after our group photo, we each got a one-to-one session with an instructor in which we got very detailed feedback on our strengths and weaknesses.

The structure of the course, with the emphasis on doing and practicing with others, was brilliant.  But like any curriculum, its success depends on the teachers who deliver it.  This crew was, to speak a bit of Minnesotan, not half bad. Which means they were good. Very Good.

Their coaching was spot on, their presentations were engaging, their style was personable, and they were fun.  The collegiality among the three of them was very noticeable. All of that helped to put us at ease, enjoy ourselves, and inspire us to work hard.

But through it all, there was an unmistakable but hard-to-put-your-finger-on air of seriousness. This was a no-bullshit course and you could not miss that.

I got my money’s worth and I’m more than a little curious and excited to see what I do with it.