Paralyzed mountain bike trials rider Martyn Ashton: his philosophy of life is one to emulate

Tym Manley, editor of the British cycling magazine Rouleur, has an article titled Reasons To Be Cheerful – One, Two, Three about his visit to the hospital bed of legendary mountain bike trials rider Martyn Ashton, paralyzed from the waist down from an accident during a trials demo in September. 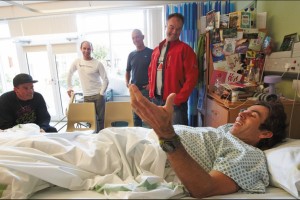 I really resonate with Ashton’s answer to Manley’s question, “Are you a religious man?”

“No, I wouldn’t say that.  It fascinates me and I’ve read a lot of stuff, but I don’t have a faith. But what’s come to my mind these last few weeks is stuff from Eckhart Tolle, which is all about ‘now’; about staying in the moment, not thinking about the past, not letting your ego be who are you, not letting the ego transform into a physical thing because it’s just thoughts. And I felt the relevance of that, right at the moment I crashed.

“I had this beautiful blue sky above me and I was like: ‘Right, well, that’s something to focus on. So focus on that. Don’t focus on this, because this is shit!’ So I just was looking at the sky, just staying in that moment, not doing anything else, it’s simple. Doing that stopped me panicking all the way to the MRI scanner.

“I don’t think Eckhart designed his system for emergency action, mind you; it’s supposed to be a life philosophy! I’ve maybe not used it correctly!”

“You have to try not to believe all the stuff in your head, you know? The bit of the industry I work in is all about people saying how brilliant you are. And my job is to try to persuade people to say how brilliant I am too, or else why am I worth sponsoring? But that isn’t actually me.

“People write things about me, but it doesn’t make them real. The ego is comprised of the thoughts you have, but they’re just thoughts, they’re not actually real. You build up a character in this business and it’s very easy to think: ‘Well I’ve got to say this and that and the other because that’s who I am.’ But that isn’t who I am – I’m just exactly the same as everyone else.

“The past? Well you think about the past, that’s it. It isn’t something you can go back to. It’s just thoughts, which are your memories of it. And what you think is the future is the same. It isn’t what the future will be. There’s only right here and now. That’s it. And I think if you can stay in the now, and appreciate it as much as you can, that is as real as you get.”