I finally made it over to the Memorial Park Mountain Bike Trails in Red Wing two weeks ago, only the second time I’ve ridden there (May, 2012 was the first).  The Red Wing Area Mountain Bike Organization (RAMBO) has done quite a bit of work on their downhill runs lately and last fall’s Upper Midwest Gravity Summit 2012 brought more attention to the gravity riding that the park offers, including this video from the that weekend:

I met Clay Haglund (MAMB) and Matthew Iatonna (Menomonie) at the recently renovated trailhead (lower quarry) which has a huge kiosk showing the trails for hiking and mountain biking. 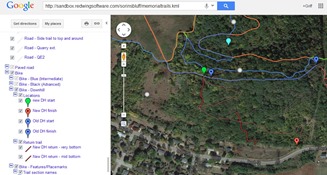 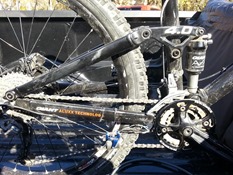 The RAMBO website has a Google map of the Memorial Park mtb trails, the most detailed Google map of a trail system that I’ve ever seen. (Some mountain biker at Red Wing Software knows their stuff.) The screenshot above links to the new downhill portion of the map. Unfortunately, Clay snapped his frame on his first DH run and had to hike his bike back.

Matthew and I, both on hardtail 29’ers, took it easy on the DH stuff.  I only took photos of this jump, site of the crash in the video above (at the 8:05 mark). I’m not sure I’d attempt it on a hardtail. Nearly all the DH runs can be rolled, making them fun for me to ride. The hike-a-bike back up is not for the faint of heart, however.

After Matthew departed, I met up with Chris Heinemann, a Red Wing local who’s also the Director of Community Planning and Development here in Northfield.

Chris and I rode all but the DH trails and he nearly cleaned the Stairway to Heaven (his lungs gave out). My lungs gave out three times before I got to the top.  Here’s a video by Red Wing mtb racer Marcus Warrington that shows why it’s so tough:

By day’s end, I was pooped, but came away A) very impressed with how fun and challenging (lots of climbing) Red Wing’s XC/singletrack trails are; and B) inspired to learn the gravity skills necessary to have fun on their DH trails. I have a ways to go.

Update Nov. 18: Allen  Geckner sent me some photos of him and Trevor Crawford on the DH runs at Red Wing on Saturday.  See, this is what I want to be able to do. Piece o’ cake for a young geezer, right?