How much are we at risk of losing the natural surface mountain bike trails in the Minnesota River Bottoms?

I’ve been riding my mountain bike on the trails in the MN River Bottoms since December 2011, just a few months after I started mountain biking. I’ve published many posts here on my blog about my experiences there.

In short, I love these trails because A) they’re only 35 minutes away from my house; B) they’re generally open when all other trails in the area are closed, especially in winter; C) there are many optional technical obstacles to ride there which I love; D) they’re not as well-maintained as the other singletrack trails in the area (vive la différence!); and E) riding in the wilderness setting along the river is a treat.

So I was distressed to learn that this trail system might be at risk because of plans under consideration to put either a paved or an ‘improved surface’ trail there.  Some members of MORC who have been paying attention and working on this issue for years have asked others to get involved.

Back in May, one of these members, Don Youngdahl, started a discussion thread in the MORC forum as a way of helping others to get more informed and hopefully engaged. Right photo: I briefly met Don (red hat) last October during the opening of the west trail head at Lebanon Hills.

Don and I are meeting on Friday this week with a couple of other MORC members who have a long history with this issue, Dennis Porter and Gary Sjoquist.  My purpose in composing this blog post now is primarily self-serving: writing about an issue is a way for me to better understand it.  Of course, I’m hoping others will benefit from it.

The issue is complicated in part because of the number of land managers, including:

For mountain bikers, the issue is focused on the bottom-land portion of the trail system between Cedar Avenue and the Bloomington Ferry Bridge.

Trail Surface: When asked about whether they prefer a different trail surface, most people seem to be satisfied with the surface they are using. Those using the paved surface in Fort Snelling State Park prefer to stay on paved trails and those using the natural surface in the Bloomington area, for example, prefer that type of surface. When asked what they think about more paved trails, users either strongly oppose or mildly oppose more paved trails.

Recommendations per trail segment including units Cedar Avenue to Bloomington Ferry page 51 (page 63 of the PDF):

In lieu of official trail development, local biking groups such as MORC (Minnesota Off-Road Cyclists) have aligned and maintained an informal trail with volunteers. A significant amount of erosion is occurring on the bluffsides, and in the ravines in this area due to a variety of factors (topography, soils, run-off from the streets and developments along the bluff, and a proliferation 52 of trails due to difficult stream crossings). Because of this, the City of Bloomington is working with MORC to develop more sustainable mountain-biking trails in this area.

It should be noted that throughout the planning process, little-to-no support was expressed from the public for a traditional paved multiuse trail through this area. (The public is defined as those who attended meetings, sent in written comments, or who participated in the Household and User Surveys.)

The Spring 2013 issue of Minnesota Trails magazine, published by the Parks and Trails Council of Minnesota, has an article about the group that’s lobbying for either a paved or ‘improved surface’ trail in the River Bottoms. The group calls themselves The Friends of the Minnesota Valley’s Trail Advocacy Group and the Bloomington Geezer Squad and its leader is Ed Crozier (see his LinkedIn page here). While he’s listed as Director Emeritus on the Friends of the Minnesota Valley website, the two sites are completely separate.

The magazine isn’t available online so here’s a photo of the article and the text: 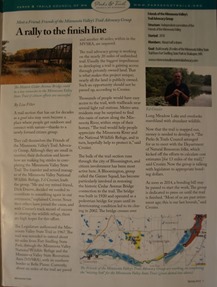 A trail section that has sat for decades as a good idea may soon become a place where people get outdoors and connect with nature—thanks to a newly formed citizen group.

“Me and my retired friend, Dick Duerre, decided we needed to contribute to something again in our retirement,” explained Crozier. Since then others have joined the cause, and with Crozier’s track record of success in creating the wildlife refuge, there are high hopes for this effort.

The trail advocacy group is working on the nearly 20 miles of unfinished trail. Usually the biggest impediment to developing a trail is gaining access through privately owned land. That is what makes this project unique; nearly all the land is publicly owned. Such an opportunity should not be passed up, according to Crozier.

Thousands of people would have easy access to the trail, with trailheads near several light rail stations. Metro-area residents may be surprised to find this oasis of nature along the Minnesota River, within steps of their homes. “The trail would help people appreciate the Minnesota River and the National Wildlife Refuge, and in turn, hopefully help to protect it,” said Crozier.

The bulk of the trail section runs through the city of Bloomington, and citizen involvement has been most active here. A Bloomington group called the Geezer Squad has become particularly involved in restoring the historic Cedar Avenue Bridge connection to the trail. The bridge was built in 1920 and operated as a pedestrian bridge for years until its deteriorating condition led to its closing in 2002. The bridge crosses over Long Meadow Lake and overlooks marshland with abundant wildlife.

Now that the trail is mapped out, money is needed to develop it. “The Parks & Trails Council arranged for us to meet with the Department of Natural Resources folks, which kicked off the efforts to calculate cost estimates [for 13 miles of the trail],” said Crozier. Now the group is talking with legislators to appropriate bonding dollars.

As soon as 2014, a bonding bill may be passed to start the work. The group is dedicated to press on until the trail is finished. “Most of us are past retirement age; this is our last hoorah,” said Crozier.

On their petition page they support having two trails. And they avoid using the word ‘paved’ for their trail:

The ten-foot wide trail will have a surface suitable for hiking and narrow-tire biking. A separate mountain bike trail will also be maintained, usually out of sight of the hike/bike trail. The two trails will share bridges and other structures at stream crossings and other barriers. ATVs, snowmobiles and horses will not be allowed.

Some of my random thoughts:

Are trail descriptions like “improved surface” and “finished” are really euphemisms for ‘paved?’

Would I support a new paved or “improved surface” trail in the River Bottoms as long as the existing MTB trail was maintained as a separate trail?  It’s hard to justify the cost, estimated to be $2.5 million. The pool of money for 21 trail-related projects initially considered by the 2013 MN Legislature was ultimately removed from the HF 1183-4 bill. It’ll likely come up for 2014 of course, and I can think of many mountain bike-related trails that could greatly benefit from that money instead.

But it’s also important to consider our relationship with our institutional ‘friends’ of mountain biking. The Parks & Trails Council of Minnesota was instrumental in securing key funding for the Cuyuna Lakes Mountain Bike Trail System. They are an important ally for the future of mountain bike trail funding/land access in MN.

The DNR should be considered a friend of mountain biking because they control Cuyuna Lakes Mountain Bike Trail System and many other areas around the state that would be conducive to future mountain bike trails. And without even being asked, they just kicked another $100,000 this year into Cuyuna.

So mountain bikers’ position needs to be very carefully nuanced, with a eye towards maintaining and even strengthening our relationships with the DNR and the Parks and Trails Council. We don’t want to win this battle in a way that contributes to losing the war. But the MTB trail system in the MN River Bottoms is a gem that we need to protect.