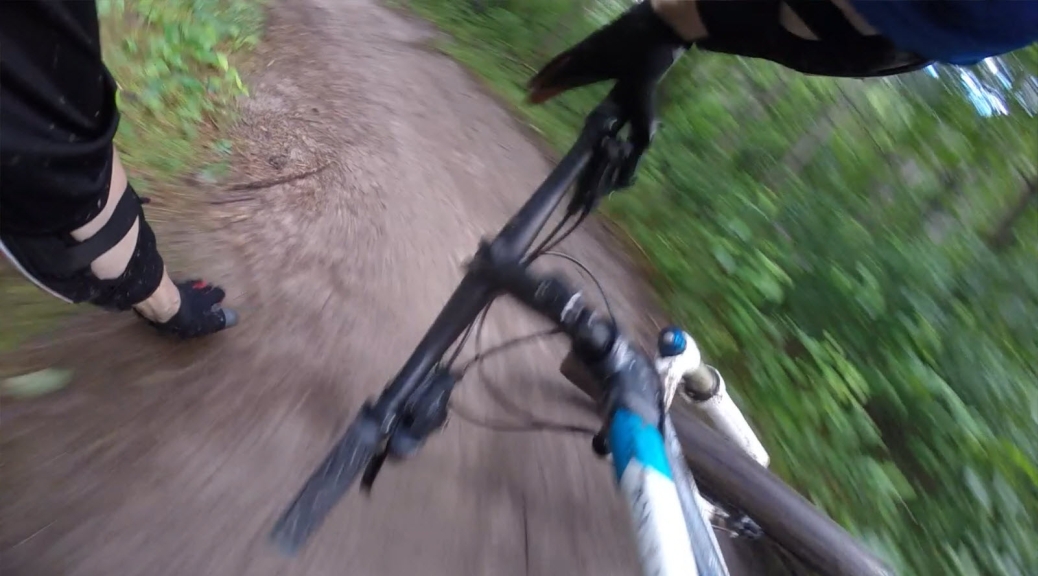 This blog post, originally published on March 22, has now been published on Singletracks.com with a slightly revised title and a major addition of a narrated video/screencast at the end. See:

I’ve been doing my best to draw attention to and foster discussion about the differing opinions among mountain bike instructors about cornering foot position.

END_OF_DOCUMENT_TOKEN_TO_BE_REPLACED

1. James Wilson at MTB Strength Training Systems has a blog post titled How to use your wrists to Bunny Hop with flat pedals with this video embedded:

2. Chris Carter at MTBTips has a new How to Bunny Hop page with this video embedded:

END_OF_DOCUMENT_TOKEN_TO_BE_REPLACED

How not to crash on your shoulder

Three weeks ago I was practicing manuals in a grassy field near my house, something I’ve done dozens of times this year.  I was wearing all my equipment, as I nearly always do when I’m practicing in the neighborhood. (I still feel a little awkward doing this but I crash enough that it’s worth it. Besides, I’m a geezer who doesn’t have to worry too much about this, remember?)

As often happens when learning to do a manual (non-pedaling wheelie), the front end of the bike came up too high, requiring a tap on the rear brake to bring it back down. This time, however, I tapped a little too hard and with the bike listing slightly to the right, the front tire grabbed the grass when it hit and stopped the bike dead, pitching me over the bars.  I’ve gone over the bars many times in my first year of riding and never have gotten hurt.  This time, however, I landed squarely on the top of my shoulder.  It felt exactly like the time four years ago when I was snowboarding and landed on the same shoulder in the same manner and tore my rotator cuff, requiring surgery to fix it. I was pretty sure the same thing happened again.

I managed to see a physician’s assistant the next day who got me in to see Scott Koehler, a sports medicine physician, a week later. He inspired my confidence, as he’s both a snowboarder and a mountain biker and, among his many duties, is a team physician for the US Snowboarding Team.  His best guess was that I bruised a bone and strained the rotator but didn’t tear it. He prescribed another two weeks of rest, at which point if it wasn’t significantly better, he’d have me get an MRI.

After a week of camping (three weeks total rest on the shoulder), I think I’m good to go. I’ve got some shoulder exercises to do so I’ll probably go easy on the technical stuff for a while until I’m confident I’ve got my strength back.

James Wilson at BikeJames.com has blogged a video on Tumbling drills to save you’re a**:

Getting good at these basic drills will save your a** some day. It can be the difference between walking away from a crash and lying there in a bloody, wimpering heap. Trust me on this one, I’ve had these drills save me more than once!

I thought I was crashing correctly by not extending my arms but I can see now that I’ve not been using my arms and hands while tucking correctly. Time to get a tumbling pad and practice this, as I’ve got a lot of crashing in my future. Thanks in advance, James.

Cornering: it’s about leaning the bike, not turning the handlebars

I learned a lot about cornering from this James Wilson video: Three Steps to Faster Corners. It’s exactly the same as turning a bike in motorcycle trials (mototrials):

I started out mountain biking this summer clipped into Crank Bros Eggbeaters with a good pair of Bontrager Multisport shoes.  After a few minor spills, I got the hang of getting out of them (rotate your heels outward)  and I could feel some benefits to keeping my feet in the right position on the pedals.

But I was still nervous about tackling the advanced technical stuff that I like and after a few scary crashes, I found some blog posts with long discussion threads that opened my eyes:

So I got a pair of Five-Ten Impact High shoes and thin VP-Vice pedals and they’ve made a huge difference. I’ve been way more adventuresome, not having to think or worry about being clipped in.

I’ll keep the Eggbeaters and Bontragers for the gravel rides.