I got feedback from Chance Glasford and Jed Olson on my pumping flat ground video that I posted yesterday. Their main advice: learn on my 24-inch Scott Voltage dirt jump mountain bike, not my 29’er. The large wheels make it too difficult.

So last night I took it out and within 5 minutes, I could feel the difference. And in about 15 minutes, I was ecstatic.  The bike was responsive and it seemed like I was ripping around. I took some video but when I watched it, I was surprised at A) how far from the correct attack position I was; and B) how little pumping I was doing with my arms and shoulders.

I watched Lee McCormack’s pumping flat ground video again and took these screenshots to make myself more aware of both problems:

He’s really crouched low. And his arms and shoulders are pumping like pistons.  So I practiced for about an hour today and then captured this 45-second video:

As you can see, I’m still not low enough in the attack position.  And I’m just starting to get the timing right on the arm/shoulder pumping motion.  I was doing it right in the first 10 seconds but then kind of lost it after that.  But overall, the difference I felt was huge. There’s no going back. My brain/body memory has it registered. I’m confident that I’ll be able to do the intermediate pump track at Eagan someday soon. And I’m eager to see what happens when I try to apply it in some corners/berms on the trail on my 29’er hardtail.

I’ve started recording video of my riding to examine my attempts to get better at various mountain bike skills.  I generally prefer to showcase myself succeeding, with an occasional crash thrown in for comic effects. But I decided it might be helpful to blog my attempts to improve, especially if it includes some self-analysis as well as links to other coaching videos that I’m watching.

And then I discovered MTB coach Lee McCormack‘s blog posts about pumping a flat surface (here, here, and here) where there are lots of pointers and helpful discussion.  He links to a video but it’s in native .mov format on his server. Here’s the YouTube version that someone has uploaded. It’s pretty amazing to see how fast he can get going:

He also points to how Brian Lopes applies the same pumping motion in this Pinkbike video: 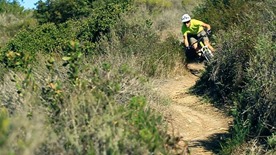 I made the round trip without pedaling, but just barely. It seems that while I’m not doing too badly pumping with my legs/hips, I’m not doing enough with my arms/shoulders. And I’m standing up too high instead of being in the attack position.  Back to school!

If you’ve got insights or links to other helpful pages/videos related to pumping a flat surface, attach a comment.

My first trip to Over The Top’s indoor BMX park: humbling, rewarding

Ever since I purchased the book Mastering Mountain Bike Skills by Brian Lopes and Lee McCormack (my blog post about it here), I’ve been interested in learning BMX skills, not to race BMX but to improve my mountain biking. Lee McCormack (LeeLikesBikes.com) has many blog posts about BMX and emphasizes the benefits of learning BMX skills in his book. And when deciding between a 20-inch BMX bike vs. a 24-inch BMX bike (cruiser), he says:

Most adult MTB’ers find 20s too much of a handful, at least at first. Start with a cruiser; then work your way down (up?) to a 20. A  winter, or even the occasional play ride, on your BMX bike will do wonders for your riding skills.

So when Chance Glasford told me last fall that Continental Ski and Bike in Duluth was closing out a 2011 Scott Voltage 24 dirt jump mountain bike, I bought it. I got in a couple of sessions at the Eagan Pump and Jump park (Facebook page here) before winter, but it was my trip to Ray’s Indoor Bike Park in Milwaukee in January where I first felt the benefits of learning to ride this bike, specifically when I learned to jump a table top, courtesy of Jed Olson’s coaching.

Jed told me last week that he and Chance were heading to Over The Top (OTT), an indoor BMX/skate/rock climbing park that’s part of the Bluff Valley Campground complex in Zumbro Falls (45 minutes from Northfield) on Friday. Good timing, as my 29’er is the shop, waiting for a new rim. I was pumped (heh) to go.

OTT is an impressive facility that bills itself as a skatepark but on Friday night, there were only BMX’ers there, no skateboarders. It also has a rock climbing/bouldering area.

Jed and Thor Shellum (a product design engineer at QBP / Surly Bikes) were airing it out pretty good over the big jumps.

My problem was that there’s not much at OTT that’s doable for a rank beginner like me. The one table top they have was not only bigger than the ones I learned to do at Ray’s.  But there wasn’t an easy way for me to get up enough speed for it since I didn’t know how to do a 180 and pump back down the ramps to gain speed. So I asked Jed to map out something that I could practice.

He suggested that I learn to do the prerequisite to a basic BMX 180, and pointed out that the when the big ramps weren’t being used by other riders, I could make a wide loop across the face of them and just concentrate on A) getting comfortable with the leaning my body with the bike on the ramps; B) pumping the bike instead of pedaling as I went back down the ramps; and C) gradually tightening up the loop. By night’s end, I was able to stay within the single ramp in the middle (red arrows) both directions. Next time I go, I’ll be ready to try a 180, which involves a bit of bunny hop.

The connection of BMX to mountain biking now makes much more sense to me because I see how learning the basic 180 maneuver of a bunny hop and pumping will make practicing table top jumps (a common feature of MTB downhill trails) more fun.

Blake Waters, whose family owns and runs Bluff Valley Campground and to Over the Top, was on-duty Friday night and made me feel welcome, as did all the other young guys there that night. He’s a talented rider, but my only photo of him is the one on the right after a slow motion crash.   (Blake maintains the Over The Top Facebook page, so you can contact him there, too.)

And in case you’re wondering, I wore every bit of protective gear that I own and was glad I did because I crashed a lot, landing hard on my elbows, knees, hips, shoulders, tailbone and head. I came away with zero bruises and just a mild ache in one knee from my old cartilage injury.  I will be back.

Learning to pump and hop so you can learn to jump

I was at the Eagan Pump and Jump Park last Wednesday for the first time in many weeks. I went straight to the beginner jumps and couldn’t do anything. I spent the next 20 minutes on the beginner pump track, got the hang of it again, THEN went back to the jumps and VOILA! I actually got close to clearing a couple of the table tops. Nothing that would be visible to anyone else but the difference in how I felt going over them was huge.

When I got home, I grabbed the book Mastering Mountain Bike Skills by Brian Lopes and Lee McCormack (first recommended to me by Chance Glasford) and re-read Chapter 9: Jump With the Greatest of Ease.

When I first read that chapter (months ago, before I had any real interest in learning to jump), this sentence stood out (page 144):

If you can’t hop a curb, you have no business jumping.

So that’s when I decided that learning to bunny hop and learning to manual were the skills I was going to focus on this year. I learned the connection between pumping and doing a manual back in July (Learn to pump at a pump park. Singletrack flow trails will never be the same) but  I’ve not mastered the bunny hop yet so I’ve not really considered trying to learn to jump.

But on pages 140-141 of the book, there is a section titled Prerequisite Skills (“Before you take to the air, you must be smooth and consistent with these skills:”) and they list these five: 1) Attack position; 2) Hopping; 3) Dropping to flat and downslopes; 4) Pumping; and 5) Doing all this with flat pedals.

The blurb on hopping:

Hopping teaches you to load and unload your bike. The higher you can hop, the more boost you can get off jumps. It also teaches you flight skills.

The blurb on pumping:

Pumping is perhaps the holy grail of all riding skills. It teaches you to load and unload in time with the terrain, and it trains you to let your bike follow an arc while you stay centered over your pedals.

For some reason, it never got through my thick skull that hopping, pumping, and jumping were all connected via the ‘load and unload’ motion. But looking at my photos of Chance riding the pump tracks (more here), I can see it now.

The connection between pumping and jumping got permanently embedded into my brain/muscle memory last week.  I’m now psyched to work at bringing bunny hopping into the mix.

Props to Chance (follow his blog here) for all the work he’s done on the Eagan Pump and Jump Park and for pestering me to buy the book, Mastering Mountain Bike Skills.  FYI, that link to the book happens to have these three image excerpts of pages 143-145 from Chapter 9: Jump With the Greatest of Ease.