Vote for Gary Sjoquist, nominee for this year’s Mountain Bike Hall of Fame. But hurry. 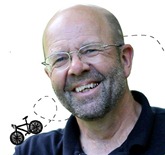 Gary Sjoquist is featured in quite a few of my blog posts since I started mountain biking last summer, so I was pleased when I heard he’d been nominated for inclusion in the Mountain Bike Hall of Fame (that’s a page on the Minnesota High School Cycling League web site, another one of Gary’s projects).

It’s not simple or quick to cast a vote for Mountain Bike Hall of Fame (MBHOF) nominees.

You first must become a member. Voting membership is $20 and can be done via print/mail or online (PayPay/credit card).

Once you become a member, they send out ballots via mail. Ballots are being sent out now and need to be mailed back by July 15th. I got mine last week (right photo).

I blogged about Gary’s contribution to bicycling back in July 2011 but that didn’t begin to do it justice. See his complete nomination page in the category of Advocacy and then get hustling.

July 27 update: Gary Sjoquist was one of five people inducted into the 2012 Mountain Bike Hall of Fame today.

August 23 update: Last night I finally got a chance to toast Gary for his induction. (Apologies for the crappy smartphone photo.)