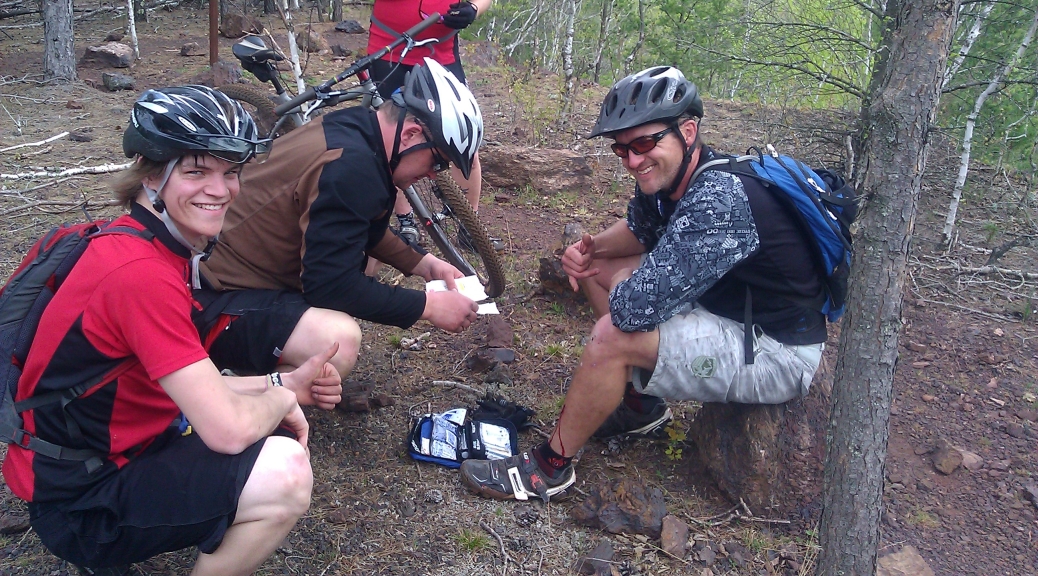 END_OF_DOCUMENT_TOKEN_TO_BE_REPLACED

Upper body armor means I can crash more with confidence

After narrowly escaping tearing my rotator cuff a couple months ago, I decided to shop around for some shoulder protection. When I saw that POC Sports had upper body armor called Spine VPD Tee that also included chest and spine protection, I figured it would be best to go all-out since my goal is to be doing more gravity-oriented mountain biking next year. VPD (or visco-elastic polymer dough).

So I ordered it from my LBS (local bike shop) and they got it the next day via QBP. There are many reviews of the Spine VPD Tee out there on the interwebs. This video provides a good overview.

As I noted in my video contest submission, most of us guys don’t want to be seen as overly safety conscious, so we avoid wearing ‘too much’ protective gear.  And with upper body protection, fears of looking like the Michelin Man creep in.  So I bought a $13 light weight practice football jersey and it does a pretty good job of camouflaging the shoulder pads, more so if I wear my hydra-pack.  And if it’s cold out, my Craft Pro Zero Extreme base layer fits nicely underneath it and my red Sugoi RPM Jacket fits nicely over it.  The jacket pulls down the shoulder pads the most, providing the best camouflage.

Of course if it’s hot out, I’ll have to shed those outer layers.  And when I add my white and black elbow/forearm pads and knee/shin pads, I look pretty much like an Imperial Stormtrooper.  Which, if it’s Halloween, is not a bad thing.

Unlike my new full-face MIPS helmet which I’ve not yet worn, I wear my upper body armor whenever I’m trying to either push my limits on speed, or I’m pushing my limits on obstacles. I’ve crashed hard with it on several times. I don’t actually know whether it has saved me on those crashes but I don’t really need to know.

When I learned about rotational violence to the brain, I bought a full-face MIPS helmet

When I attended IMBA’s Great Lakes Summit back in June, Aaron Rogers, president of the Copper Harbor Trails Club and Trails Specialist with IMBA Trail Solution showed a video about the IMBA Bronze-level Ride Center that had just opened in Copper Harbor, Michigan.

Some of those guys going down the Flying Squirrel jump trail in that video (as well as another one here) are wearing full-face helmets.  And so when I started experimenting with the jumps at the Lexington Ave. Pump and Jump Park, it occurred to me: I’m going to like doing this. I want to ride that trail at Copper Harbor. But I don’t want to end up in a hospital bed, paralyzed, thinking ‘Dang! I should have purchased a full-face helmet.’

When I started poking around the intertubes, I discovered that there are new helmets equipped with the Multi-directional Impact Protection System technology, or MIPS.

This June article in Mountain Bike Review titled POC and MIPS Collaborate on New Styles sums it up nicely:

The Multi-Directional Impact Protection System, MIPS, was developed by a Swedish neuroscientist to improve protection from oblique impacts to the head. Concussions and brain injuries are often caused by angled head impacts that create rotational violence to the brain, causing strain on the brain tissue.

MIPS utilizes either a low friction layer on the inside of the helmet liner for inmold helmets or a low-friction layer between the outer shell and liner for hard shell/two piece helmets to absorb much of the energy created by both unilateral or oblique blows to the head.

One of my local bike dealers, Mike Bikes here in Northfield, gave me a great deal (considerably better than anything I could find online) on the Cortex DH Helmet from POC (full list price $500). QBP had it in stock and shipped it to Mike’s within two days.

I know, pricey. And more helmet than I really need for my current skill level. (There are other MIPS helmets on the market that aren’t full-face, so shop around.) But when it comes to protecting my geezerly body, I’d rather err on the side of too much.

If I can get the hang of doing the beginner table-top jumps at Lex and Leb, I’ll start wearing the helmet.  I’m hoping to get to Copper Harbor this fall.

‘Reveal Your Path’ video contest by Salsa Cycles: Fellow geezers, I entered with a message for you

I saw the movie Reveal the Path when it premiered in Minneapolis back in June. At the end of the movie, Mike “Kid” Riemer, Marketing Manager for Salsa Cycles, the main sponsor of the movie and the event, announced that they were going to be having a Reveal Your Path video contest this summer.  The details:

Create a video and tell us your story. You could win a Salsa El Mariachi or Fargo frameset, a complete Fargo or El Mariachi bicycle or the grand prize of a Mukluk Ti bicycle and an Alaskan beach-riding adventure with the Salsa crew!

Perhaps someone—or something—sparked your adventurous spirit when you were a kid. Or maybe you came to it later. Tell us how it happened and where it led you. We want to hear about the great things you’ve done, and continue to do, with bicycles. Most of all, we want to know about the rides you dream of doing in the future. So really—If you could ride your bicycle anywhere in the world, where would it be?

I thought about entering but I struggled to come up with a theme that would be compelling enough for me to want to do the work. I wasn’t interested in just a I-did-this-and-then-I-did-that type entry. Late last week, it occurred to me to do something aimed at my fellow mountain biking geezers but that still wasn’t specific enough. On a whim, I popped in my DVD of the 1971 motorcycle movie On Any Sunday to see if I could get some ideas on how to narrate a documentary.  When I watched the segments of just regular folks (not the pros) competing at Sunday motocross races and the Widowmaker hillclimb, I found myself laughing again at the crashing scenes and director Bruce Brown’s witty commentary.

And then it occurred to me: crashing is not fun but it’s part of the fun of mountain biking, just like dirt biking. If you want to improve your skills, you have to be willing to crash.  If you’re worried too much about getting hurt, you won’t be too willing to experiment.  And one way to keep the fear of getting hurt under control is to wear a lot of protective gear.

Problem: Most of us guys don’t want to be seen as overly safety conscious, so we avoid wearing ‘too much’ protective gear.  We’d rather be seen with scrapes and scars, which are informal badges of honor.  But pain is sneaky. If you bruise the shit out of your knee in a rock garden, the next time you approach it, your brain remembers what happened last time, even if you consciously don’t. So you take a less demanding line through it, rather than riding and re-riding that line that caused you trouble.  Likewise for that high skinny or steep drop. And so your skills stagnate.

Advantage, geezers:  When my three sons were teens, I thought I’d try to learn to snowboard with them. That first day nearly killed me. Bruised my knees, hips and tailbone, hit my head hard several times, wrenched my shoulder.  (Ski slopes in Minnesota consist of hard-packed snow 90% of the time.) I got the hang of it by the end of the day and knew that the sport could be fun. But if I kept getting hurt like I did on that first day, I knew I wouldn’t keep doing it.

So I bought a snowboard helmet, knee and elbow pads, and most important, a pair of used hockey breezers (hip and tailbone protection).  The next time I went snowboarding with the boys, they refused to be seen with me because they said I looked like the Michelin Man with all the protective gear underneath a huge winter coat. Doofus Dad.

But looking back on it now, the reason I came to love snowboarding (I still do it) is that I was willing to constantly crash as I kept learning new stuff. I didn’t have to worry about impressing girls or being made fun of by my buddies by how I looked.  My ego was more directed at being able to do little tricks and my body was interested in continuing to increase the pleasurable exhilaration of the sport.

So all of this came together in my head for creating a video for the contest.  I would tell my story of my first year of mountain biking but frame it with a sermon to my fellow geezers on how wearing lots of protective gear is a huge advantage for learning to improve your skills, even if you think it makes you look a bit like a doofus who’s overly concerned about getting hurt.

Unfortunately, I only had one day to create the video.  And I had no video of myself mountain biking.  So I bought a GoPro on Saturday afternoon and used it for the first time on Sunday morning, capturing some clips of me riding at the Lexington Ave. Pump and Jump Park in Eagan (Facebook page) and then at Lebanon Hills.  I got home and discovered that much of the video wasn’t usable because A) I was using the chest mount harness and it aimed the camera too low; and B) my water pack’s strap was flapping in front of the lens. AARRGGHH.

With a deadline of midnight looming, I knew I was in trouble.  The video was too long (over 14 minutes) and I didn’t have time to shorten it and fix all the little glitches.  So while it’s not likely to make the cut (a panel of judges will select eight finalists), I’m glad I did it and hope that my message resonates with a few of you fellow geezers out there.