At the Battle Creek group ride (Every Wed. at 5 & 6pm) we were discussing how we have never seen anyone climb the Wall of Death trail with no dabs. So we decided to put a bounty of a case of beer… People are always looking for more technical trail features, well here you go.

After a few weeks of discussion, the idea of scheduling an informal competition emerged and an informal contest announcement thread was launched, announcing a date and miscellaneous rules and rewards. My suggestion to include a go-slow competition riding down the Wall of Death (WOD) was adopted.

Yesterday at 1 pm,  crew of BC Dirt Bosses and volunteers (including Tom Gehring, Travis Miller, Brett Swenson, Paul Thorsgaard) got things rolling for the ten competitors, including yours truly.

For the hill climb, they had 7 flags spaced out from the bottom to top for markers to indicate climb level.  If you dabbed between marker 3 and 4, then 3 was your score for that run.  But the ultimate criteria for the winner, like any hill climb, was fastest to the top with no dabs. Next criteria was furthest up without dabbing.

The champion: Heath Weisbrod. He went much higher than anyone else without dabbing on both his 2nd and 3rd runs. Here’s my video of his 3rd run in which he gets his front wheel over the final timber before dabbing:

The go-slow downhill competition was to see who could take the longest time to descend the Wall of Death. If you dabbed, you were eliminated.

Mike Andert won easily. He was the last rider of the competition and after demonstrating his prowess at balancing, he graciously rode to the end when it was clear he’d beaten Heath’s time. He could have balanced there all afternoon.

RESULTS OF BOTH COMPETITIONS: 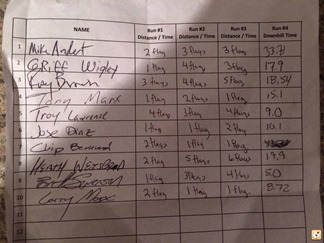 As a geezer, I’m happy to just be participating in any competition so I was pleased with my two 4th place finishes. Plus, I got a chance to meet a bunch of riders for the first time, people I’d only known from the MORC forums.

See my large slideshow of 33 photos (recommended) or SLOW CLICK this small slideshow: