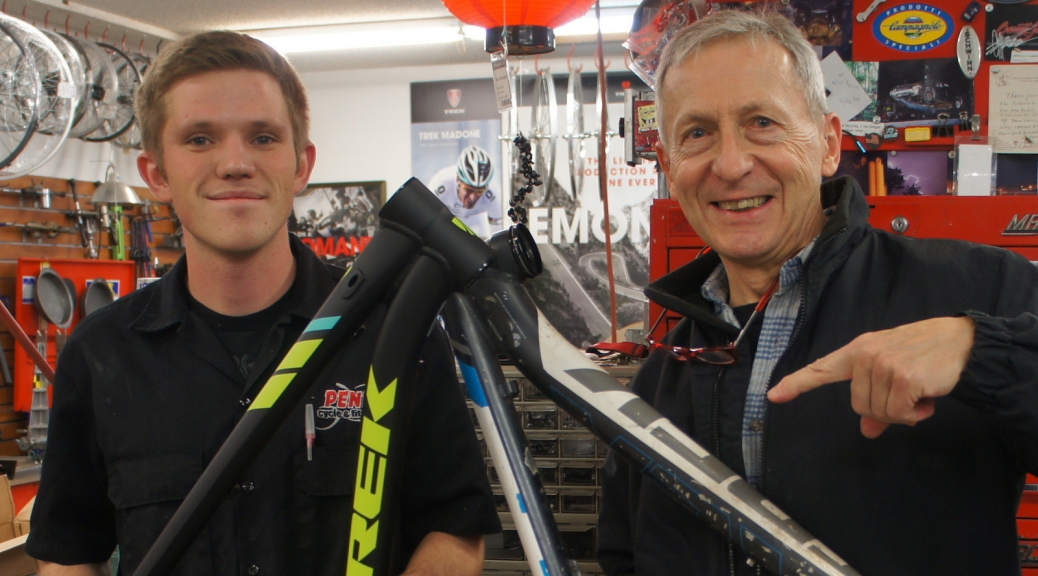 A few months ago I noticed two small cracks developing at the top of the seat tube on the frame of my 2011 Trek X-Caliber 29’er. It gradually got to the point where seat post wouldn’t stay up. A couple of my fellow riders suggested that I check with my local Trek dealer since the Trek Care bike warranty covers “Frames for the lifetime of the original owner.”

I bought the bike from Penn Cycle (see my June 2011 blog post for the story).  And although we have two Trek dealers here in Rice County (Mike’s Bikes in Northfield, Milltown Sports in Faribault) that I regularly patronize, I knew that Penn Cycle would have my original purchase info in their database.

END_OF_DOCUMENT_TOKEN_TO_BE_REPLACED

Around noon on Sunday of the Ride the Keweenaw weekend, Karl Erbach, Territory Manager at Trek Bicycle and I were riding a trail on Brockway Mountain called The Flow, one of the many spectacular trails that are part of the Copper Harbor Trails system.

About a third of the way down the trail, we came upon Dave and his 8 year-old son Colin from Green Bay, Wisconsin. Colin’s tire was shot: punctured tube and blown sidewall. Karl patched the tube and then deployed a trick I’d never seen before. He used a candy bar wrapper (he said a dollar bill would work, too) to reinforce the sidewall.

In 15 minutes or so, Karl had worked his magic (he also did a few other adjustments on Colin’s bike).

Dave and Colin were soon smiling on their way back to town, riding 3 miles instead of having to do a tough hike-a-bike.