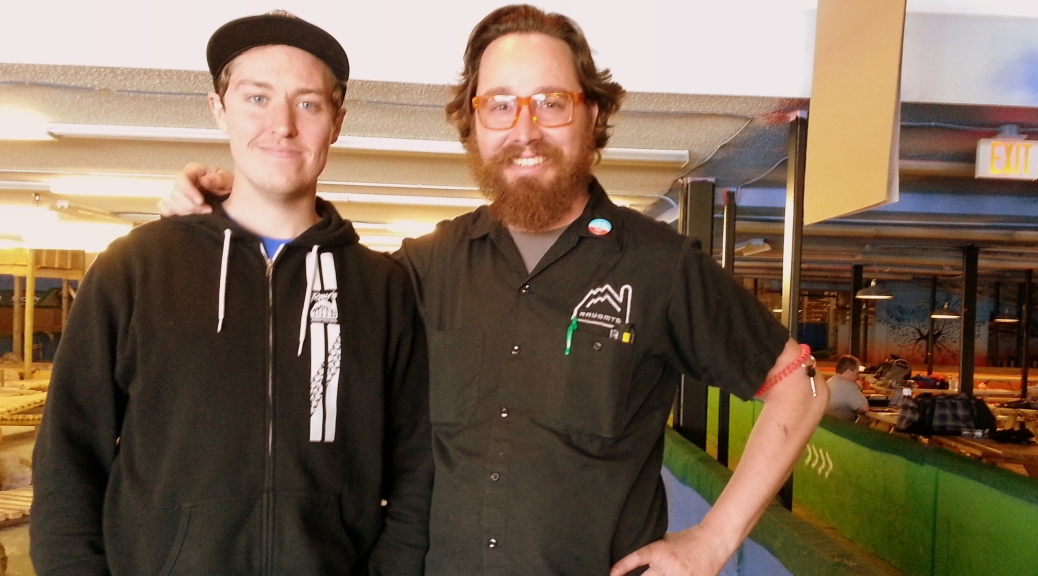 When I rode Ray’s Indoor Bike Park in Milwaukee the first time last year for the  two-days-for-the-price-of-one weekend for IMBA members (see my four blog posts tagged with Ray’s), I met Marketing & Sponsorship Manager Jeff Dowhen. He was quite appreciative when he later saw my blog posts about the weekend and we’ve kept in touch a bit since.

The Friday April 25th Lee Likes Bikes one-day skills clinic I signed up for was scheduled to take place at the Capitol Off Road Pathfinder (CORP) CamRock trail near Madison but trail steward Chuck Hutchens closed it late in the day on Thursday due to the all-day rain. I put Lee McCormack in touch with Jeff to see if Ray’s could accommodate the clinic and fortunately, Jeff answered his cell phone at 10 pm and gave the thumbs up.

When I brought both my X-Cal 29’er and Scott 24 park bike into Ray’s on Saturday to practice what I’d learned on Friday, I was frustrated because I’d been having brake issues with both bikes that I wasn’t able to solve. (I’ll spare you the details.)  When I saw Jeff and off-handedly whined about it, he pointed out the on-duty bike mechanic for the day, Eric Crouthamel, and said to ask him to take a look.

In about an hour, Eric worked his magic on both bikes. “How much do I owe?” I asked. “No charge. No new parts were needed.”  I later asked Jeff if this was standard practice or was he just giving me special treatment. He indicated that they do indeed try to help people with miscellaneous bike adjustments so that their experience at the park is a good one. Cool.

Eric is one of those bike mechanics who knows how to put you at ease.  It’s started immediately with his engaging smile, which seems like a small thing but because I was feeling a bit embarrassed about my mechanical ineptitude, it meant a lot.  When he discovered the source of my bikes’ problems, he explained them to me without a trace of condescension or preaching (shockingly, some of the problems were due to my neglect). He seemed like he genuinely wanted me to understand and that he really enjoyed what he was doing.  That matters. I guess that’s why he’s an Ambassador.

Jeff, I later discovered, is no slouch when it comes to bike park skills. I took this photo of him on Sunday and then later discovered that he’s a Madera BMX Pro team rider. See the end of this January ‘bike check’ interview on The Union for a little of his background, as well as all their videos of him. You can follow him @its_jeff on Instagram.