Last week I blogged about how to get up and over the bridge rock at Lebanon Hills. In a comment thread on Facebook about the video, Dan Haglund noted that my chain ring bashguard made contact with the rock. I wrote:

I think this was because I placed the front wheel a little too high on the rock, almost clearing the front edge. I think it’s best if it bounces off the rock a bit about 3/4 of the way up because when the compressed forks rebound, the steeper angle of the bike gives you more clearance for the bottom bracket.

I poked around and found this old video called Going Up Obstacles (Getting up objects) featuring Hans Rey and pals in which they show how to avoid having the chain ring bash the rock. It’s a trials video but it has application here. I can see that I need to learn how to use my leg/foot to lift the rear wheel with that scooping motion. At the 2:20 mark:

Before your chain ring or your back wheel hits the object, you have to throw your weight forward a certain way over the handle bar and at the same time you lift with your feet pushing down, back and up and unweight the back wheel enough to lift it behind you and onto the object. An advanced technique you can learn to hop up high objects is to ram the front wheel into the top of the object. The wheel bounces upward, giving you added lift.

I manualed into it and as soon as my front tire hit the top of the rock, my bash ring "BASHED" hard into the face of the rock. Dave Tait showed me how the pro’s do it. He pedaled in with some good speed and within the last six inches of the wood bridge, he pulled off a bunny hop that cleared that two and a half foot gap and had his BACK tire landing on top of the rock…. AMAZING! His bike has got to be pushing 40# too as it’s heavier than mine which is 35#.

After holding my bike in position on that rock, I definitely think the 29" wheels are a big help with conquering this without a clean bunnyhop. With my front tire on top of the rock, my back tire was right at the base and bash guard was in contact with the face. I think I’d have better luck coming up slow and trying to trials hop it.

I told Clay that I thought the bashing could be avoided without having to do the full rear wheel leg/foot lift of a bunny hop, just unweighting so last night I went back to Lebanon Hills to see.

I started by attempting a more extreme angle to the Leb skills park rock that I’d mentioned in my earlier blog post as a good training rock. Ray Brown took the video:

I got over it clean but as you’ll hear in this video, not without bashing:

So I wasn’t confident that I could do it on the bridge rock without bashing. Here’s my attempt, first at normal speed, then a slo-mo version, then stop motion:

As you can see in the final frame, I was able to clear the rock without my bash ring making contact. Front wheel placement didn’t seem to be a big issue as I originally thought.

But you can also see that the rear wheel does make significant contact with the rock. I’m able to absorb it without too much bounce back but ideally, a well-executed bunny hop with full rear wheel leg/foot lift would be best. I need a lesson from Dave Tait.

Last night I reread Chapter 6, Wheelie and Hop Over Anything in the book Mastering Mountain Bike Skills by Brian Lopes and Lee McCormack.  Some quotes:

… push explosively into your pedals and propel your body forward. After you push, lighten your feet to allow the pedals to come up.

… At the moment your weight presses into rear wheel, press explosively down into the pedals and spring upward. If you get light on your pedals… the rear wheel will levitate.

… The harder you push your pedals down, the harder the earth returns the force, and the higher you go. It’s just like hopping on your feet.

He uses the label "lift your rear wheel" in several places but nowhere does he define this as a scooping motion where your foot/leg actually lifts the wheel like Hans Rey described in the video I cited.

Most of the how-to-bunny-hop videos that I’ve pinned to my Pinterest board on the subject recommend the scooping/lifting motion. 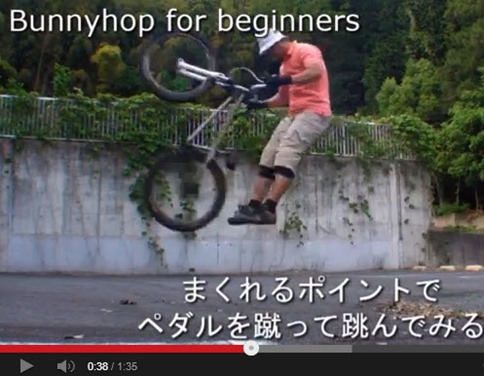 But look at the one titled Bunnyhop for Beginners which has no narrative, with text captions that appear to be in Japanese and/or Chinese.  The slow motion sequences, especially the practice exercises starting at the 37-second mark (screen capture above), seem to show what Lee McCormack recommends: an explosive pushing down into the pedals and not a scooping/deliberate lifting up of the rear wheel. My inclination is to learn the pushing down technique first.