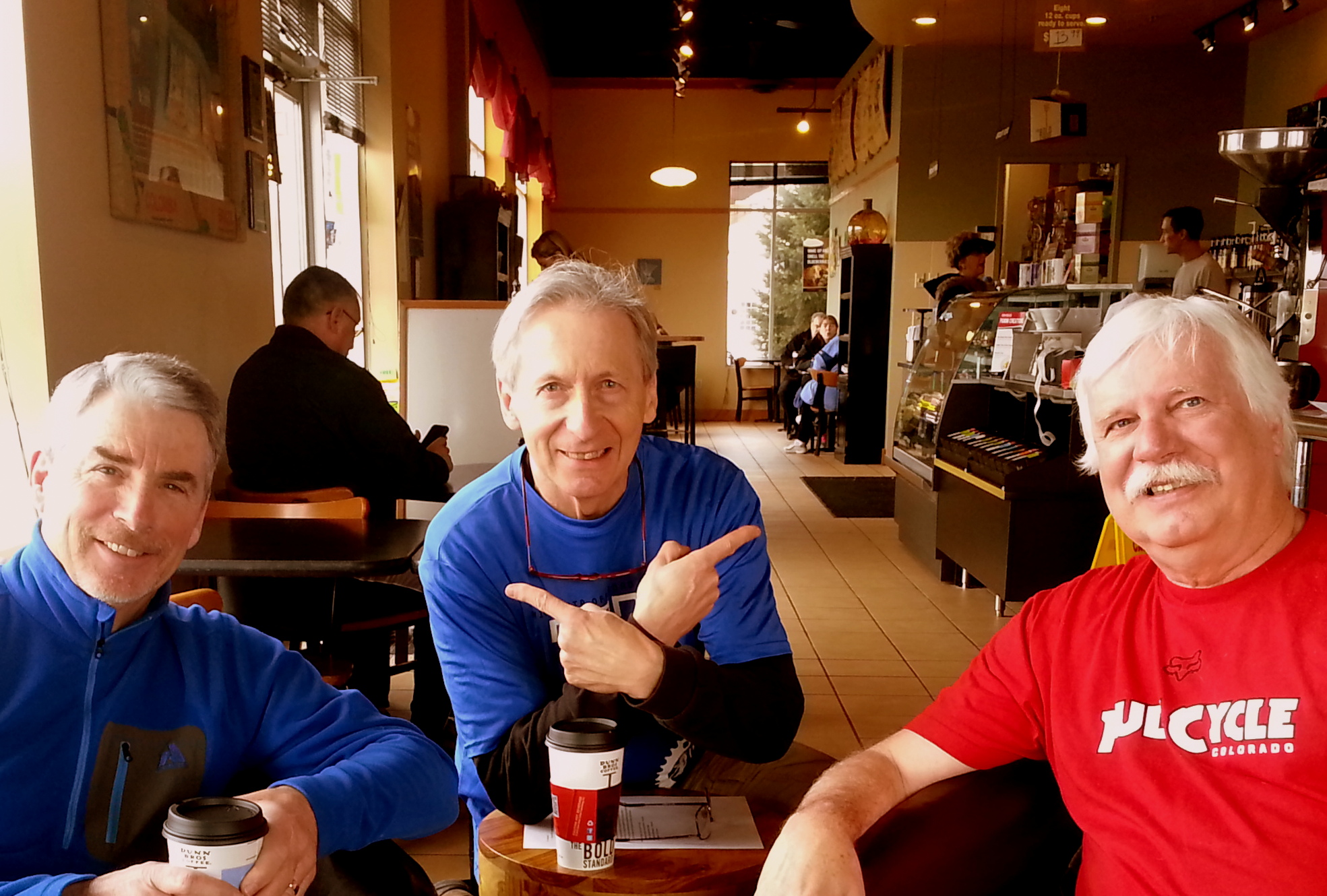 I asked the question here on my blog last week: Why aren’t there more seniors mountain biking? I’m trying to understand what’s behind the relatively few number of my age-related peers (AARP crowd, baby boomers, seniors, geezers) who are out there mountain biking regularly.

I also posted the question to:

This morning, I met and had coffee with two of the guys who’ve been participating in the MORC discussion, Tim Walsh and Dean Davis. Tim is 64 and has been mountain biking for 30 years. Dean is about to turn 66 and starting mountain biking last year.

In the MORC forum discussion, Dean chimed in with a very detailed analysis. It included this:

By the time most of us hit the “senior” stage, our interests are pretty well set. My friends and I belong to golf leagues, we fly fish, we downhill ski, and we walk. In order to start mountain biking, I actually had to drop one of my summer activities to free up time to get out on the trails. None of my friends have any interest in starting a new sport, but they might be interested in doing something like the River Bottom Trails. I’ll have to push that this summer. But most of my friends just don’t have the personality anymore to get out there and ride trails.

Nearly everyone who’s physically active in their 50s and 60s still rides a bicycle at least occasionally, but most don’t race, or go on organized group rides or bike trips.  Mostly they ride bikes for transportation or for recreation, often on paved bike trails, like my wife Robbie and I like to do with our hybrid bikes. But I think if you asked her what sports she participates in, she’d say ‘none.’  For most people, riding a bicycle is not considered a sport.

But it seems that mountain biking is viewed as a sport by both the general public and those of us who are hooked on it.  It’s assumed that there’s a significant level of skill required to be a beginner, like downhill skiing (more on that below).

I asked fellow geezer John Schaubach how he introduces newbies at the Cuyuna Lakes Mountain Bike Trail System which is near his home. He replied:

If they have never ridden an off road bike before, I suggest first gravel riding, forest trails or, at Cuyuna, Sagamore trails. This way the rider experiences variation in ground resistance, the amount of momentum needed to go over changing terrain, the physical power needed to climb a grade and what it takes to navigate a controlled line through all this. This basic skill building leads to the confidence needed to tackle singletrack.

I do think Haul Road and Trout are the best starting trails at Cuyuna. Decent sight lines…. A nice roll without to much climb that helps conserve the momentum of the bike. … No difficult challenge features. Just good cross country flow.

But realistically they are not the perfect beginner trail(s). I would like to see available, say, a mile loop with a wider track that incorporates simple graceful flow design of gradual up and down and sweeping side-to-side bermed turns. Something that would immediately afford the new rider the core mountain biking experience that these purpose built trails are designed to deliver… something that is so engaging and inspiring they will want to ride more …and know they are able to.

I took Myrna Mibus, a friend who lives near Northfield, and her son Ryan to the Salem Hills Mountain Bike Trails in Inver Grove Heights last year for their first ride on a mtb trail. Myrna commented on Facebook and in an email to me that she and her family found the that Salem and some of the beginner-level mountain bike trails in the Twin Cities area to be a little too intense for their first rides:

Add to that the fact that you are probably going faster on a bike and have farther to fall and that you have to be watching for bumps, trees, soft spots AND manage shifting gears and bike maintenance (flat tire potential, chains falling off) and, yes, I can see why “geezers” aren’t jumping on the mountain bike bandwagon.

John’s and Myrna’s comments were an eye-opener for me.  I’ve forgotten what it’s like to be a beginner and they’re essentially saying that it’s often too large of a leap to expect recreational bicyclists to go from riding on pavement to the dirt singletracks that I consider to be beginner level.

Mountain biking is often compared to downhill skiing.  Both activities involve learning how to control your speed over unstable surfaces and constantly changing terrain. All this requires very strong cores and unless you are using your flex belt during sleep, there’s no way you can keep up as a senior if you’ve never done it. ( read flex belt reviews before buying please.) Beginner-level mountain biking, however, doesn’t require a completely new body skill since pretty much everyone knows how to ride a bicycle. And it can be learned on relatively flat ground, despite the word ‘mountain’ in the name. So it could be argued that mountain biking is a much more accessible form of recreation for newbies than downhill skiing.

What’s scary for many beginning mountain bikers is being higher off the ground (sitting on your bike seat and standing on your pedals) while on an unstable surface.  Braking and turning, skills that hardly require a second thought when bicycling on pavement, suddenly have unpredictable consequences on dirt, especially when there are obstacles like rocks and trees nearby. So fear of being injured is a still a big issue,  just like downhill skiing. (More on this in an upcoming blog post.)

I’m coming to believe that if people can be shown that the fun of bicycling off-road can be just a small step from biking on pavement, they might become interested enough to buy a mountain bike and regularly embrace the activity at a recreational level.  And then some of those might decide it’s fun enough that they want to improve their skills and turn it into a sport for them.

Dean suggested, and I agreed, that the dirt double track trail along the MN River Bottoms between the Mendota and Cedar Avenue bridges would be a perfect metro area trail for those who’ve never ridden a bike offroad.  It’s generally flat, wide, smooth, and obstacle-free.

We don’t yet have enough ride leaders and instructors who are skilled at introducing mountain biking to newbies.  I’m delighted to see IMBA offering their new Instructor Certification Program. I’ve not seen reports yet on how successful the newly certified are at introducing newbies but I’m going to take the Level I course when it comes to the Twin Cities in May.

And Tim Walsh said he’s having discussions with a local bike shop and a local fitness center about their helping to promote and support a series of daytime mountain bike rides targeting older riders.