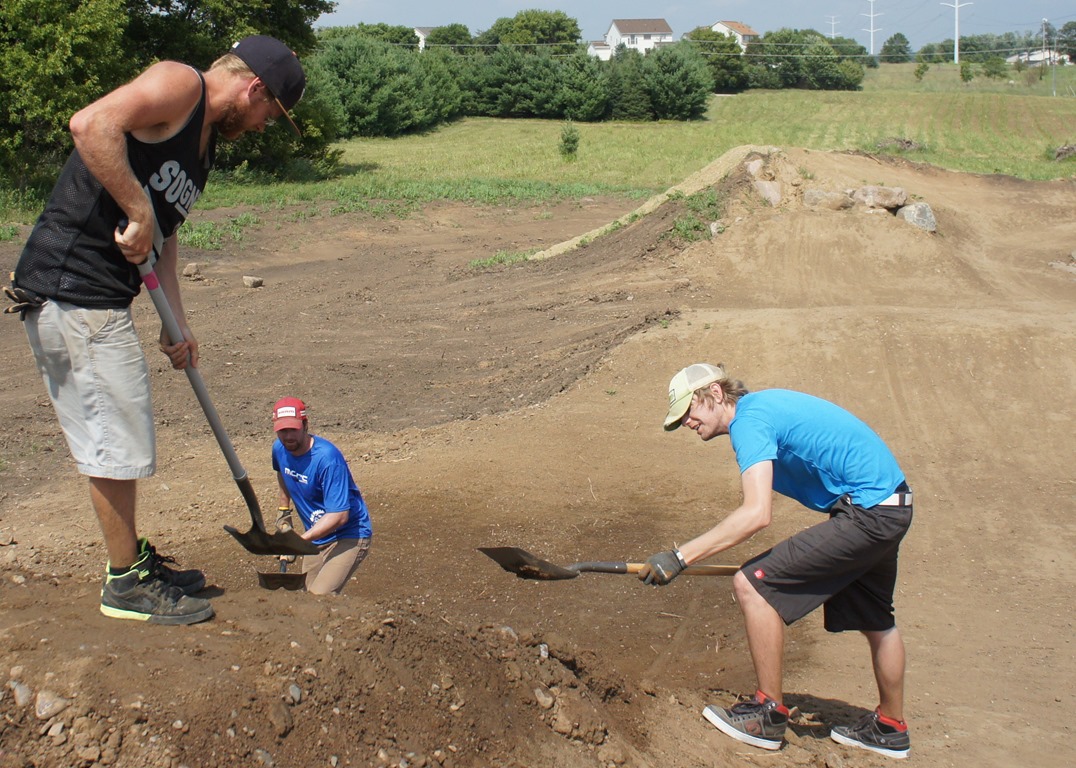 The MORC Board announced its annual awards last month and four young guys (three in the right photo) were recognized for their volunteer work:  Chance Glasford for the President’s Award; Adam Buck for Volunteer of the Year; and Colin VanDerHyde and Mike Mullany for Trail Workers of the Year.

As a geezer, I’m glad to see this.

Here’s the MORC announcement for each, with some of my photos of them tossed in.

Each year the MORC President selects an individual who has shown exemplary leadership and dedication to a MORC project.

In September 2012, Chance Glasford started talking about building  a bike park in Cottage Grove.  A year later, he has a bike park coming to fruition in Cottage Grove.  This massive undertaking has been spearheaded by Chance, who has worked tirelessly on this project from the very beginning.  In September 2012, he started talking to Zac Dockter, City of Cottage Grove Parks and Recreational Director.  Chance also joined MORC, and also joined the MORC Board of Directors.  He presented the idea and design of the Bike Park to the City Council, where it gained initial approval.  He gained approval from the City of Cottage Grove citizens and he gained approval from the MORC Board to move forward.  He promised to build the bike park completely on donations and by fundraising and has accomplished this so far.

Chance has donated about 1,000 hours to the creation and building of the Cottage Grove Bike Park.  He has attended multiple meetings with city officials, MORC board meetings, bike park planning and design meetings, phone calls, conference calls.  He’s spent hours securing a sponsor, Rumpca Excavating, Inc. who donated use of materials, donated dirt and donated equipment for the bike park.  He gained the support of the local Lion’s Club chapter, who helped plan and create the Party in the Park – a fundraising event so successful that it raised nearly $5,000 on a rainy day.

When IMBA Advanced Trail School came to town, Chance took a week of vacation from work so he could spend as much time as possible with the Trail Care Crew, building and learning from the best in the business.  Please take a moment to watch this video, outlining the Cottage Grove Bike Park project.

Of course, this hasn’t been a single handed operation.  Chance has rallied volunteers to help build the bike park.  He estimates that the total volunteer hours for the bike park build, including everyone that helped this summer (not including city employee labor and IMBA Trail Care Crew) is between 2500-3000 hours.  That’s a massive undertaking.

It is with great pride and appreciation that Chance Glasford is the recipient of the 2013 President’s Award.  Thank you Chance!

VOLUNTEER OF THE YEAR: Adam Buck

Recipients of this award are volunteers who have spent many hours working on dedicated MORC projects.  Volunteers of the year typically donate over 100 hours of their time to MORC.

Adam Buck – In 2013, Buck has worked tirelessly at the Cottage Grove Bike Park.  He has donated around 225 hours of his time and expertise to the building of this park.  He has spent 17 full days there, sometimes from morning to night.  Without Buck’s dedication to the CG bike park we would not have finished the 4x course and it would not look as awesome as it does. He also put in multiple complete days out there running machines!

TRAIL WORKERS OF THE YEAR: Colin VanDerHyde and Mike Mullany

Recipients of this award are volunteers who have spent significant time doing trail work, contributing to trail design and trail projects, working at more than one trail regularly and taking a leadership role at trail work. This year MORC would like to recognize two individuals for this award.

Colin VanDerHyde moved to the twin cities this spring from Oregon and has jumped in, full-on, with valuable experience with building advanced features from his experience building trail on the west coast. Colin has regularly contributed to trail work at Lebanon Hills trail and has also donated at least 1 day a week working at the Cottage Grove bike park.  He has attended all the major build days at the bike park, and has expressed interest in getting even more involved at Leb.  His willingness to dive into the scene and get his hands dirty has been inspiring to others.

Mike Mullany – Mike has also worked tirelessly at the Cottage Grove Bike Park.  He has donated at least 175 hours of his time and made major contributions to the design of the park.  He has also put in multiple complete days running machines.

LAND MANAGER OF THE YEAR: City of Cottage Grove